The Boathouse in Orlando Florida

We just came back from our annual Disney World trip and as usual we ate at some fabulous restaurants.  Our biggest surprise came with dining at Disney Springs' The Boathouse.  It's awesome and a tad bit pricey but worth every penny.  Before I jump right in, a few words of wisdom for you.

Disney Springs is not your same old downtown mall  - it's a major shopping mall that is likely super crowded.  So that means, you need to try to get to your reservation a little earlier than usual or leave enough time to get through the crowds.  Also, the restaurant is likely to be crowded too and the check in for reservations is on the inside so don't get caught on the line outside the restaurant.  Finally, if you want to eat in a boat, I think you need a larger sized party and a reservation in advance. 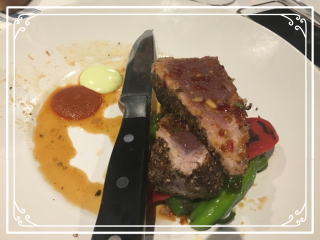 Coriander Seared Ahi Tunsize party and request it in advance.

We ended up scoring an outdoor table which was on their dock.  It had a beautiful water view. The menu has a lot of different fish and seafood options - quite a few of them are local.  I ended up ordering the local white gulf shrimp.  Normally, I'm not a lover of shrimp because I'm worried about it's source but not this time.  They were delicious.  Anyway, back to the menu. They feature Gibson steaks which they make a big deal out of; for me, I don't go to a seafood restaurant and order steak.  However, someone in our party did order a Filet and they let me taste it - it was really good and cooked nicely.  Their drink menu was good  - featuring a lot of local  Florida beers. 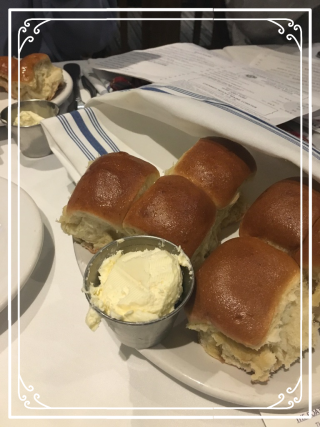 The Delicious Bread at The Boathouse

The first thing we dug into was their bread.  It was delicious.  Yes I understand.  Bread.  It was sweet, yummy and firm.  The butter was also delicious.  I only had one piece but that was due to my diet not my lack of desire.  We ordered a second round which was also devoured.  Go ahead a pull the bread apart many many times!

OK, back to the shrimp.  I ordered the locally caught gulf shrimp in what was surprisingly steamed in Old Bay - not that Old Bay seasoning on shrimp is unique, but the shrimp tasted so good, I assumed there was something else on them.

My entree was a delicious coriander seared tuna roasted shishito peppers in a soy lemon sauce.  It was awesome and prepared nicely. As mentioned above, someone from our party did try the steak and let me have a taste and it was great.  Again, I would recommend there fish or seafood because you are at a seafood restaurant but if you want to go steak, have no fear because it's tasty.  My son ordered the wild caught salmon on cedar plank - I tried it.  It was good but pretty much standard.

This was a highlight of our 8 day trip to Disney World this year.  It's not cheap but then again, you are in Disney World.  Enjoy it. 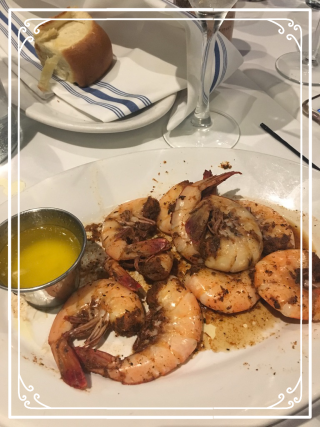