I was a regular at the Long Valley Pub and Brewery; my family used to go there every Friday. In fact, there was a publication that listed the best breweries in the USA and we were listed as a regular customer and called the Brew Pub family.  However, over the years, they changed chefs, management, and owners.  The food went down and then down, and then down again.  The Brew Pub also had a weird odor which I assumed was the yeast.  I used to joke about it with the owner of the Old Mill.

Meanwhile the beer was always good, but the market changed and now you can get micro brews pretty much wherever you go.  I'd give the restaurant a go and then stay away; we'd have a good meal and then go there too much and the food was inconsistent.  That's changed very recently.  Anyway, here's an updated review below and to see how much it has changed, my harsh OLD review from over 6 years ago.  Needless to say (really write), The Long Valley Brew Pub is a great building, has great micro brews, and good pub food.

We've been here two times in the past month for lunch and both visits were enjoyable.  We were seated right away and the staff was very friendly.  I ordered the same thing both times - not that there weren't other items on the menu but we are on a mostly protein diet so I wanted to stick with safe diet items. 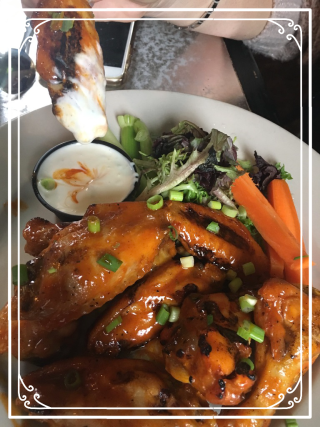 I started out with the beef barley soup which was solid and loaded with meat and veggies.  Lisa ordered their naked wings which were tasted and hit the spot.  Naked because they weren't breaded or floured before being fried.  We went hot sauce and they looked and tasted great.

Both visits I went beer sampler.  Not that I couldn't decide which beer to get (Amber or Lazy Jake) but I just like getting the beer sampler because it's fun.

As I did with the beer sampler, I ordered the same thing - the best of the wurst  but with a twist.  I substituted out the mashed potato for sautéed spinach and I really liked it.  This dish was always a favorite of mine and continues to be a favorite.  Your get three different wurst with whole seed mustard.

I think the Brew Pub is a solid place for lunch or dinner, especially if you are looking for pub food and good beer. 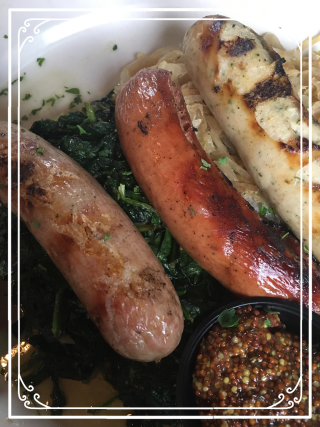 Best of the Wurst

Writing this review as I sit at my table.  First time back in many years after being a regular.  We waited 30 mins for chicken nachos and wings which when they arrived were cold.  Unfortunately they arrived after the entrees were attempted to be delivered which we sent away.  Food is average but the timing was horrendous.  Our burgers were ok but I ordered my medium and they came on the well done side - not sure if they continued to cook our food after we turned it away.  Beer is still good but I wouldn't drive far for it.

If you are coming to the area and want a good burger go to the old mill.  If you want great entrees go to redwoods